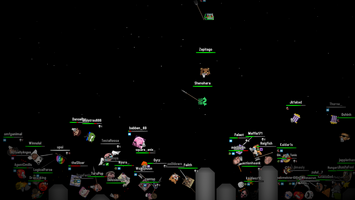 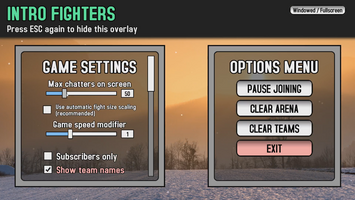 Main update notes:
- Emote AI has been upgraded
- Viewers can now create teams for their ingame emote characters
- New weapons & equipment (melee weapons, ranged weapons and shields)
- Emotes can now sometimes dualwield weapons & equipment
- Current weapons have been rebalanced
- The round system has been replaced with a dynamic fight scaling system. There's no longer rounds/wincounts. Instead each player has their
personal killcounter. This change was made mainly because it allows the game to support smaller streams much better.
- The join queue has been changed. Now it works like a queue would but every other player is picked at random

General improvements:
- Lots of optimization...
- Lots of polishing done to existing features...
- Chatters can now specify the emote they spawn as by including !emotename in their chat message
- The random emote picking is now actually random (previously it preferred bttv/ffz emotes way more than normal global twitch emotes)
- Added support for blacklisting emotes (blacklist has to be manually edited from the game's files) (C:\Users\YOURNAME\AppData\LocalLow\Lexone Games\IntroFighters\blacklistedEmotes.json)
- Added support for VIP badges
- Added error reporting for error cases (such as incorrect OAuth token, etc)

Major bug fixes:
- Fixed a bug where the game would stop listening to twitch chat if there was no activity for a while